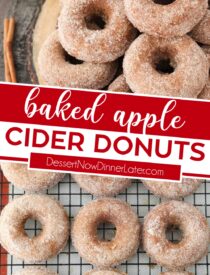 What are apple cider donuts?

Apple cider donuts are cake-like donuts flavored with cinnamon, nutmeg, allspice, and of course, apple cider — after its namesake.

These sweet donuts are soft and cakey with a hint of apple flavor and spices.

Apple cider donuts are incredibly popular in locations with apple orchards and cider mills, but can be found seasonally during the autumn months in most grocery stores.

The apple cider donuts that you purchase from stores are almost always fried.

Bakery fried donuts use a donut machine that easily shapes the batter into rings as it is dropped straight into the fryer. (It’s pretty fun to watch actually — a fond memory from my days as a donut decorator.)

Frying donuts at home with a soft cake batter is much harder. You would first need to pipe the dough onto parchment paper and let it chill in the refrigerator. Then you would cut around each donut and drop them individually into the fry oil.

Baked donuts are easy to make with donut pans. No mixer, rolling pin, or donut cutter required! Plus they are much healthier, as you won’t be dealing with any extra fat from the frying oil when you bake.

Why are apple cider donuts so good?

Apple cider donuts are apple, spice, and everything nice. Fall flavors at their finest. The secret is to use reduced apple cider to really bring out the flavor.

The best apple cider donuts are eaten warm and often paired with a mug of hot apple cider. Cozy fall vibes right there.

Are cider donuts made with cider?

As mentioned before, cider donuts are made with real apple cider that is typically boiled down into an almost a syrup-like consistency so the flavor is more concentrated.

Is there a difference between apple cider and apple juice? Not by much, but yes! According to the Massachusetts Department of Agricultural Resources:

Fresh cider is raw apple juice that has not undergone a filtration process to remove coarse particles of pulp or sediment.

Apple juice is juice that has been filtered to remove solids and pasteurized so that it will stay fresh longer.

Where do you find apple cider in the grocery store?

Now that you know the difference between apple cider and apple juice, where do you find it in the store? Apple cider may be shelf-stable or refrigerated.

NOTE: Refrigerated apple cider is typically only sold seasonally in the autumn months.

If it’s off-season you can still find shelf-stable apple cider in the juice aisle. It may be near the apple juice or in the organic and natural section of the store.

After you’ve got your apple cider, it’s time to bake these donuts!

(Full printable recipe card is at bottom of post.)

NOTE: Do not over-fill donuts. If you have extra batter, bake it into cupcakes for about 14 minutes.

Bake and Coat with Cinnamon-Sugar

You can store them at room temperature in an airtight container up to 3 days. Feel free to nuke them in the microwave for 10 seconds if you want to re-heat them. 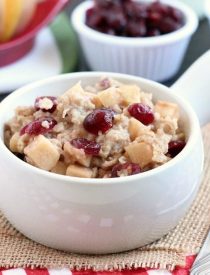 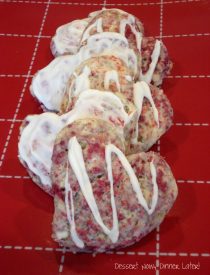 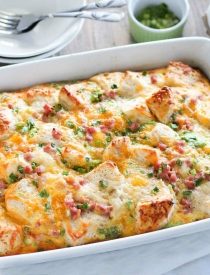